BETAFPV Micro receiver is based on the ExpressLRS project, an open-source RC link for RC applications. ExpressLRS aims to achieve the best possible link performance in both speeds, latency, and range. This makes ExpressLRS one of the fastest RC links available while still offering long-range performance. 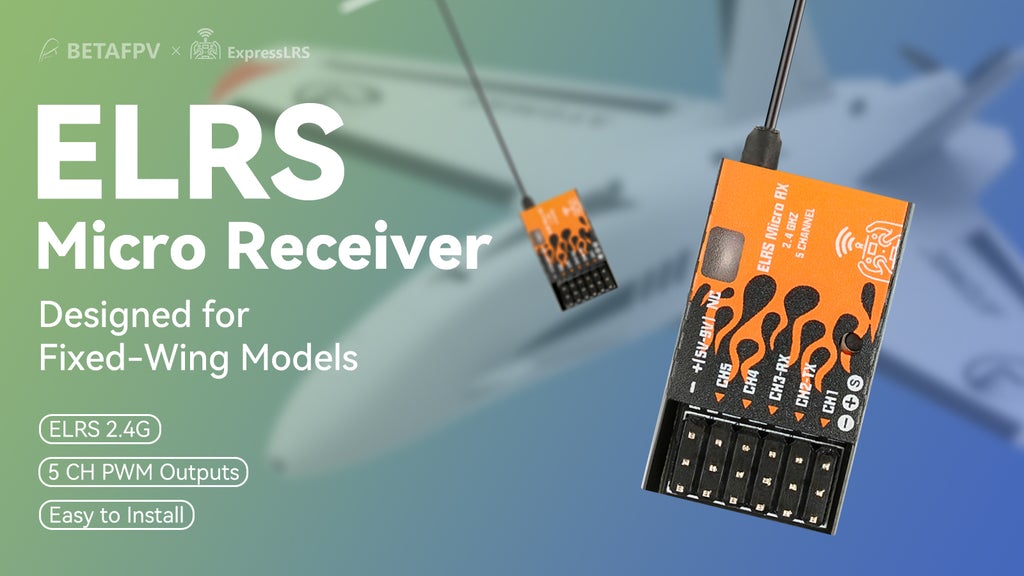 A ton of ExpressLRS items are available now!

ExpressLRS now supports direct PWM output from receivers that have been specifically designed for this mode. BETAFPV ELRS Micro receiver features PWM output for the application of fixed-wing, helicopters, RC cars, boats and etc, and supports failsafe function, which can protect RC models from being out of control. Besides, the plug-and-play design makes it very easy and friendly to use.

Note: To work with PWM receiver, please make sure the TX and RX firmware is ELRS V2.0.0. 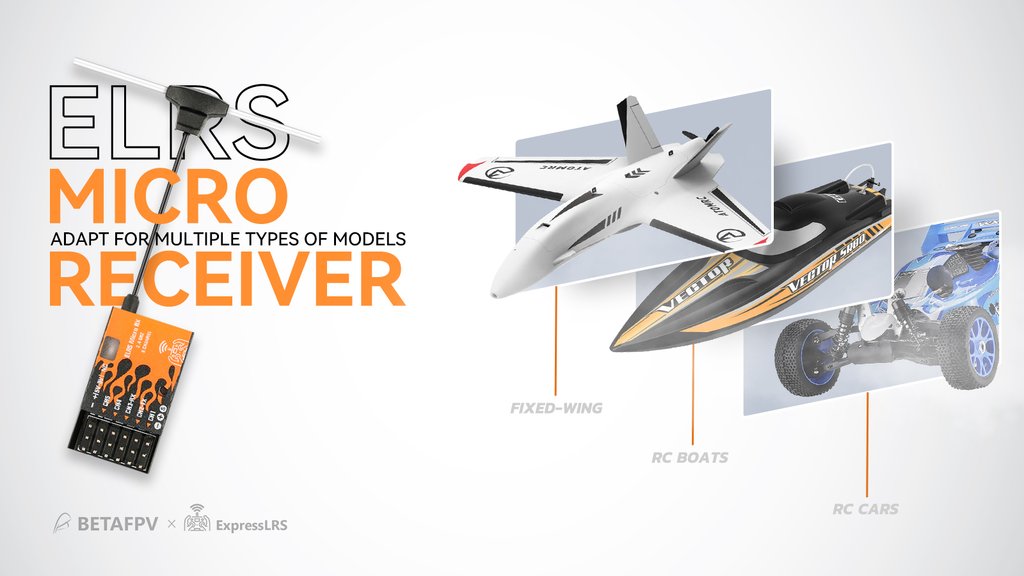 What is the major difference between Micro receiver, Nano receiver, and Lite receiver?

Micro receiver is the first ELRS receiver with PWM output on BETAFPV. It is widely used in fixed-wing, helicopters, RC cars, boats and etc. Weighing about 4.5g with an antenna means that a FPV drone can not afford to carry. With the plug-and-play connect ports, Micro receive is very easy to use and does not need to solder.

Nano receiver (2.4G version) is the first and (so far) the only receiver with power amplifier (PA+LNA). It has 100mW telemetry output and better sensitivity when longer range. Lite receiver doesn't have a PA/LNA on them, so its telemetry power is as what the RF chip SX1280 came with 17mW.

Beside, Nano receiver comes with normal external Dipole T antenna. Lite receiver has SMD ceramic antenna and in theory it is not so long range.

Micro receiver is used for fixed-wing, helicopter, RC cars, and boats. High recommend the Nano or Lite receiver to build on a drone. Especially on 65-85mm whoop drones with limited space and need lightweight, Lite receiver is a better choice. 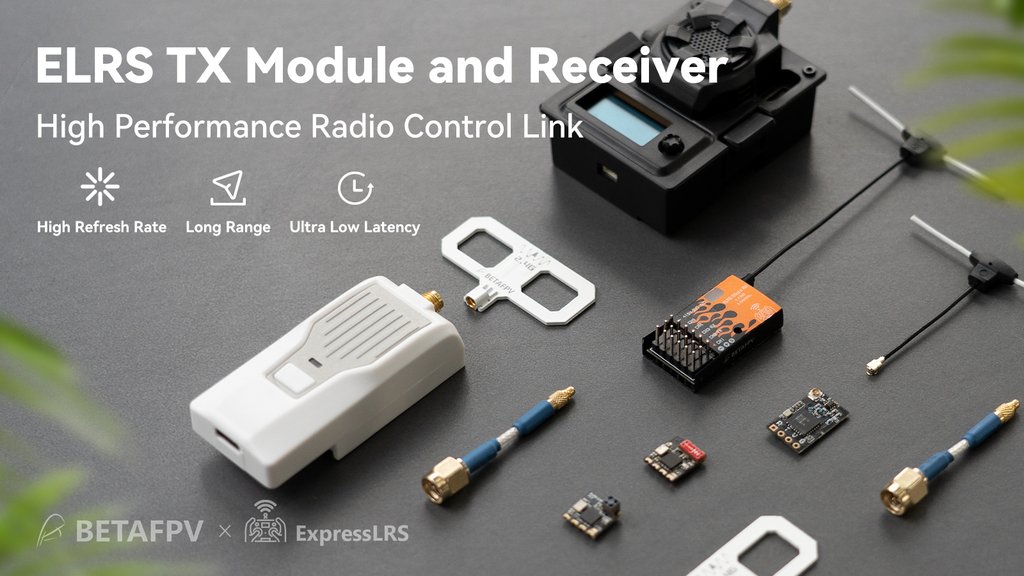 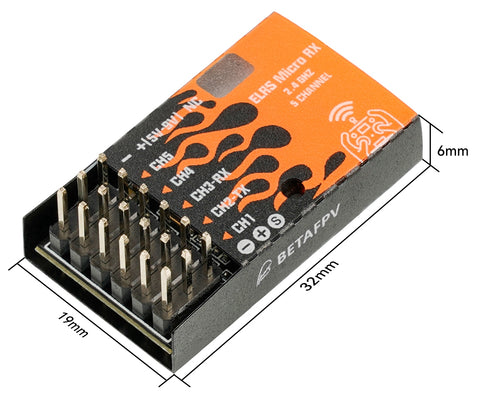 Below is the diagram for ELRS Micro receiver. 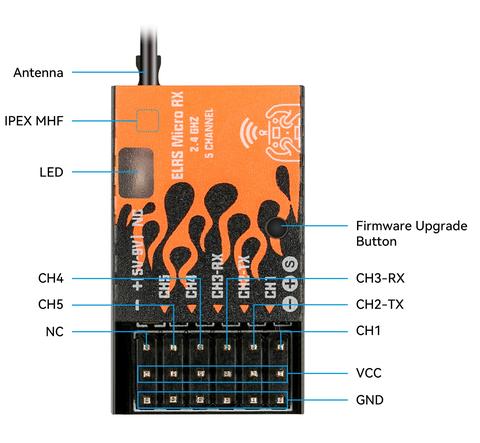 Note: The firmware version of the micro receiver manufactured by our company is ELRS 2.0.0. ELRS Innovative team has officially released version 2.0.0, which is not compatible with the 1.x version. Significantly, the TX module and receiver have to be in the same ELRS version, otherwise, the frequency cannot match successfully.

Please click here to know the way to flash firmware for Micro receiver.

ExpressLRS is an open-source RC link for RC applications. Everyone could find this project on Github or join the discussion in Facebook Group.

ExpressLRS is based on Semtech Lora SX127x or SX1280 hardware for RX and TX respectively. it aims to achieve the best possible link performance in both speeds, latency, and range. At 900 MHz a maximum of 200 Hz packet rate is supported. At 2.4 GHz a blistering 500Hz is currently supported with a custom OpenTX build. This makes ExpressLRS one of the fastest RC links available while still offering long-range performance.

More and more vendors start to support the ExpressLRS radio protocol in different parts, like radio transmitter with ELRS in stock, drone with built-in ELRS receiver, ELRS TX module for JR bay, or Nano bay. BETAFPV team take part in this project and provide a series of ExpressLRS components.

Note: once the devices have been successfully bound, the receiver will store the binding information. There would be no need for re-bind on the later use as the devices would be connected automatically.

Note: If you reflash the firmware of the Micro receiver with your own Binding Phrase, please make sure the RF TX module has the same Binding Phrase to perform an auto bind.

When the connection or signal is lost between the radio transmitter and receiver, the failsafe function will adjust all the channels to the failsafe values set by the users, maximum keep safety and prevent from flying away. It's necessary to set up failsafe values properly if you are not using a flight controller, such as RC fixed-wing. 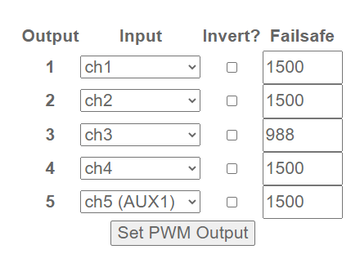 Note: Failsafe values are absolute and do not use the ''invert'' flag. 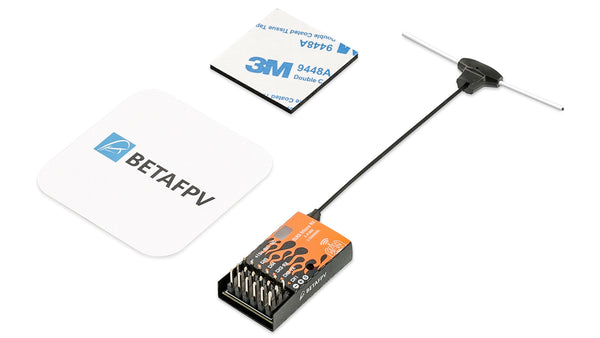